Former South Carolina first lady and Sullivan’s Island resident Jenny Sanford’s black Labrador retriever Julius has brought attention to the town’s dog laws. In late February 2012, Julius escaped from his yard while Sanford was away. He was picked up by town police, and Sanford is now facing a court appearance and $1,042 fine.

Columbia’s WIS News Channel 10 reports the story in this video:

Are you a Sullivan’s Island resident, vacationer or considering a move to the town? We thought we would take an in-depth look at the town’s dog ordinance so that you can avoid the same fate as Sanford and Julius.

Rule number one: apply for a permit. All dogs — residents or visitors — MUST have a permit before they can set foot on the island. The permit application fee is $25 for residents and $35 for non-residents (per dog). A $2-per-dog discount will be given if an American Kennel Club Canine Good Citizenship certificate is submitted at the time of application. Owners will need to show proof of rabies vaccination, and the permit must be renewed each calendar year. (If you get your permit in August, keep in mind that it expires January 1.)

In addition to having up-to-date rabies vaccinations, owners must confirm that their dog has never attacked or bitten another animal or person. Liability insurance (such as a homeowners, renters or condominium policy) is also required. Once your application and information are reviewed, the Town of Sullivan’s Island will issue your pet a numbered tag similar to a rabies tag, which must be attached to the animal’s collar at all times.

Sullivan’s Island’s dog ordinance includes a lengthy list of offenses that could earn you the same type of hefty fine Sanford received. Obviously, dogs must be leashed at all times when not on private property — and a person must be holding the other end of the leash. There are several exceptions to this rule: dogs are allowed off-lease at the beach from 5:00 a.m. until 12:00 p.m. in winter (October 1–April 30). In the summer (May 1–September 30), dogs can play off-leash from 5:00 a.m. to 10:00 a.m. From 10:00 a.m. until 6:00 p.m. during the summer months, all dogs prohibited from the beach whether leashed or otherwise. 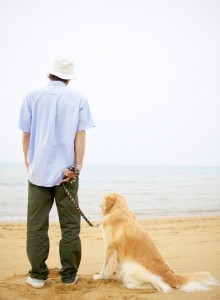 Is your best friend legal?

Other finable offenses include dogs who bark “habitually or continuously so as to constitute an annoyance to the neighborhood,” bringing a dog onto the island without going through the permit process, allowing a dog to disturb nesting or just-hatched sea turtles and using a leash that is longer than 10 feet.

Also, pet owners — or pet sitters for that matter — MUST clean up after their pets. Any person in control of a dog on Sullivan’s Island is obligated to “immediately collect, remove and dispose of all excrement deposited by such animal on any beach, public property, street, right-of-way, sidewalk, public way, playground, or upon private property owned by others.” Anyone walking a dog must have a plastic bag or other acceptable container in hand at all times, and once used, the bag or container must be placed in a trashcan.

The town lays out its expectations thoroughly with its three-page application and six-page dog ordinance, leaving little gray area. At the end of the day, having such an explicit pet policy helps protect all island residents, pet owners and the pets themselves. It allows for easy identification if a pet escapes, like Julius did. Requiring pet curbing helps reduce the spread of disease and keeps the island clean. The 2012 dog permit application and ordinance can be viewed on the town’s website. If you own or rent real estate on Sullivan’s Island, make sure to familiarize yourself with the documents to avoid unnecessary fines.