The Town of Moultrieville was incorporated by S.C. State statute 200 years ago on Dec. 17, 1817, at the request of the residents of the Village of Moultrieville. The reason cited was the rapid growth in the Sullivan’s Island population during the summer and autumn months that year due to the “unusual prevalence and alarming effects of Yellow Fever.” Ultimately, residents sought the authority by incorporation to establish police and schools and provide a means to pay for them, according to the Battery Gadsen Cultural Center.

Throughout Moultrieville’s existence, the biggest issue plaguing the small town was the feud over land ownership. At the time, the S.C. State statute enforced that property owners solely owned the house and were not entitled to the half-acre plot of land on which it was built. This sparked a resistance movement known as “Taxpayer Revolt.” This resident outcry in 1906 was shunned and swept under the rug. About a half-century later, in 1968, island residents were issued full autonomy of their property.

Moultrieville’s charter was revoked in 1865, mainly due to the island’s residential destruction in the aftermath of the Civil War. After the war there were only 14 homes remaining, mainly shanties. Saint John the Baptist Church was the only public structure standing tall after the shelling of federal buildings. During the post-war recovery, by 1872, the island made a resurgence with 300 occupied homes and another 100 being built.

Nearly a century later, in 1975, the Town of Sullivan’s Island was incorporated with its first mayor and town council. The Battery Gadsen Cultural Center is a non-profit organization preserving the culture of art and history on Sullivan’s Island.

Below is a timeline of interesting facts about Sullivan’s Island: 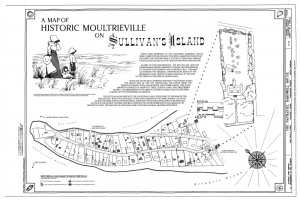