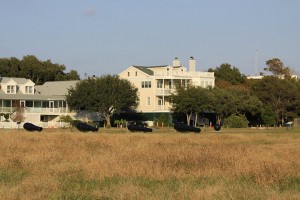 This 52-degree, overcast December morning on Sullivan’s Island has us thinking about the New Year that is fast approaching. It’s quiet here most of the time: every now and again, we get a celebrity visitor or two, there is the occasional hurricane threat, we have our local political debates, and there are several big annual events on the island. But the near absence of commercial development keeps life peaceful for the families who live here.

The year began, as it has every year since 1995, with the New Years Day Polar Bear Plunge. Sponsored by Dunleavy’s Pub, the event raises money for the Special Olympics and involves costumed or swimsuit-clad bathers who plunge into the Atlantic Ocean from the shores of Sullivan’s Island. The temperature for the 2011 event was colder than average, and it is too early to predict what the weather will be like for the 2012 event. Temperatures average around 59 degrees for the high and 37 degrees for the low, and records for that time of year include a high of 78 degrees and a low of 23 degrees. Undoubtedly, participants are hoping for warmer rather than colder weather. Fundraising drives are already underway for the 2012 event. Anyone interested in spending their New Years Day taking a Polar Bear Plunge on Sullivan’s Island should be there by 1:00 p.m. — remember, this a big event, and traffic onto the island for the Plunge usually backs up, so it is best to get an early start. After raising $44,000 in 2011, the pub hopes to raise $50,000 during the 2012 Plunge.

The big event this year was the 150th anniversary of the start of the Civil War, which began in the Charleston area on April 12, 1861. The commemorative event began around dawn and included hundreds or re-enactors, cannon blasts and theatrics, drawing in thousands of visitors to the area. Events were staged at Fort Johnson, Fort Moultrie and Fort Sumter as well as in the Charleston Harbor.

Throughout 2011, a local debate over the elementary school has resulted in a lively back-and-fourth. The current public Sullivan’s Island Elementary School is a small, older beachfront facility. The Charleston County School District aims to build a much larger school in its place, but island residents say the proposed school is too large for the small island town.

And the year is wrapping up with unusually warm temperatures. This is wonderful for visitors and beach residents alike, but it has brought something a little unusual and not all-together pleasant: Portuguese man-of-war jellyfish — usually only a concern during the summer months — have been showing up in the waters around Sullivan’s Island and washed up along the shore. They can deliver a painful sting if stepped on, and beach visitors have been warned to watch their steps.