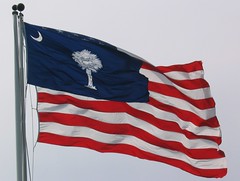 The 223rd anniversary of Carolina Day will be held on June 27 and 28 on Sullivan’s Island. This is an annual event in observance of the 1776 battle in which the American patriots turned back British ships attacking the coast.

To help celebrate and honor the feat, the South Carolina Historical Society, with the help of other local groups, will gather for ceremonies at the White Point Garden, near Charleston’s historical district. During the Civil War, the garden was used as fortification for the city. Even today, visitors can find original mortars and cannons on display.

In addition, traditional artillery and musket firing demonstrations will be held at Fort Moultrie on both June 27 and 28. Fort Moultrie was the site of the Battle of Sullivan’s Island bank on June 28, 1776. Since 1960, the fort has been used as part of Fort Sumter National Monument. Admission to the fort will be free for the Carolina Day weekend.

Also, an interesting historical fact is that the legendary palmetto tree (seen on the blue South Carolina state flag and all over the area) was used in the fort’s construction. The palmetto logs helped to absorb the shock of British cannon balls during the Battle of Sullivan’s Island.