Fort Moultrie To Observe The Battle Of Sullivan’s Island

Fort Sumter National Monument will mark the 241st anniversary of the Battle of Sullivan’s Island with special programs on Saturday, June 24.
The fort will be open 9 a.m. – 5 p.m., and park entrance fees will be waived for the day. Visitors of all ages will explore the American Revolution through the life of a soldier in South Carolina.
Musket drills and firing demonstrations will take place at 10 a.m., 11 a.m., and 3 p.m. At 1 p.m., Dr. Eric Emerson, Director and State Historic Preservation Officer at the South Carolina Department of Archives and History will present a special program about the British plan to attack Charleston in 1776.
Carolina Day, observed annually in South Carolina, commemorates the successful defeat of British naval and land forces by Carolina and Virginia patriots on June 28, 1776. This was the first decisive victory by the American colonies in their fight for independence, and prevented the British from gaining a foothold into South Carolina for another four years. Fort Moultrie is located at 1214 Middle Street, Sullivan’s Island. (Credit: Island Eye News) 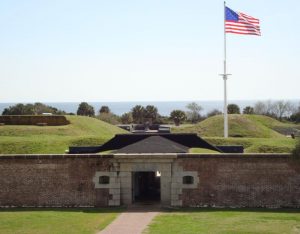